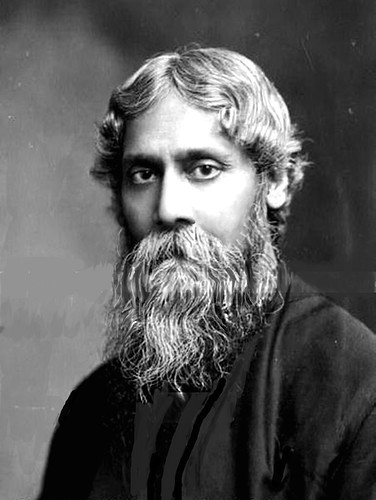 What I must do is all that concerns me, not what the people think. This rule, equally arduous in actual and in intellectual life, may serve for the whole distinction between greatness and meanness. It is the harder, because you will always find those who think they know what is your duty better than you know it. It is easy in the world to live after the world’s opinion; it is easy in solitude to live after our own; but the great man is he who in the midst of the crowd keeps with perfect sweetness the independence of solitude. – Self-Reliance, 1841, Ralph W Emerson

Ahh, to know what one “must do”. Easier said than done, especially in a crowd – as The electric sage points out.

Years ago I tried to free myself from him and went from the mythologies of the suburbs to the games with time and infinity, but those games belong to Borges now and I shall have to imagine other things. Thus my life is a flight and I lose everything and everything belongs to oblivion, or to him. – Borges and I(Labrynths),1964, Jorge L Borges

Borges, inimitably, on why it is pretty hard to “know thy self”.

When the heart is hard and parched up, come upon me with a shower of mercy.

When grace is lost from life, come with a burst of song.

When tumultuous work raises its din on all sides shutting me out from beyond, come to me, my lord of silence, with thy peace and rest.

When my beggarly heart sits crouched, shut up in a corner, break open the door, my king, and come with the ceremony of a king.

When desire blinds the mind with delusion and dust, O thou holy one, thou wakeful, come with thy light and thy thunder.

Relying on his strong Upanishadic spirituality, Tagore offers us an interpretation of transcending one’s limited self. If only we that are “shut up in a corner” could learn like Tagore to “break open the door … with the ceremony of a king”.

On November 5, 2014 the team responsible for the development and management of the Spark ecosystem (Databricks) announced the results of an impressive benchmarking contest.

We are proud to announce that Spark won the 2014 Gray Sort Benchmark (Daytona 100TB category). A team from Databricks including Spark committers, Reynold Xin, Xiangrui Meng, and Matei Zaharia, entered the benchmark using Spark. Spark won a tie with the Themis team from UCSD, and jointly set a new world record in sorting.

Their official entry can be found here.

A 100TB sort could be thought of as approximately taking  the 80 odd trillion dollars in Global GDP as of 2014 in $10 notes with unique sequence numbers and then sorting them in order.  The Spark team took less than 30 minutes to do this using 207 nodes(renting each node would have cost about $0.25/hour @ Elastic Map Reduce pricing). So this would have cost about $25 in total. That’s uniquely arranging every $10 produced in an entire year on this planet in under 30 minutes. If that doesn’t get you thinking about tracking consumption and production at a granular level not sure what will.

For a nice visual representation of why sorting 100TB may not be as easy as it sounds click on the lovely illustration by Mike Bostock below.

Junk food's fall is next. #changehappens #wetheeaters RT @conradhackett: The rise and fall of smoking in the U.S. pic.twitter.com/EZEkNID3Xc

I eagerly await the availability of Roberto Calasso’s Ardor translated by Richard Dixon.

From Wittgenstein’s head-spinning notes “On Certainty”.

31. The propositions which one comes back to again and again as if bewitched—these I should like to expunge from philosophical language.

105. All testing, all confirmation and disconfirmation of a hypothesis takes place already within a system. And this system is not a more or less arbitrary and doubtful point of departure for all our arguments: no, it belongs to the essence of what we call an argument. The system is not so much the point of departure, as the element in which arguments have their life.

How wonderful to find – meditating on boredom can liberate one from it.